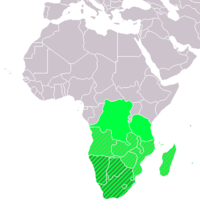 The Export-Import Bank of the U.S. opened a new front in the trade war between America and China with its biggest loan yet in sub-Saharan Africa, as it plans to compete more aggressively on the continent.

The lender has just provided $4.7 billion to fund a Mozambican gas project—the largest share of about $15 billion raised for the development.

“China is our competitor and one that we want to compete with to win,” he said. “We do have a mandate from Congress to emphasize what we can do in sub-Saharan Africa so we’re clearly open for business there.”

The investment comes as tensions between Washington and Beijing escalate amid a bruising trade war and President Donald Trump’s orders to end Hong Kong’s special status and sanction Chinese officials responsible for clamping down on dissent in the city.

China is Africa’s biggest trading partner, with two-way flows totaling more than $180 billion—almost four times that of America. Over the past decade, Exim has authorized about $12.4 billion for U.S. exports to sub-Saharan Africa, the lender said in February.

Exim became fully functional again after being reauthorized in December, with the mandate to offer loans that rival rates and terms offered by China. At least $27 billion of the agency’s total financing has been directed toward this purpose.

The bank’s board quorum was also re-established in May last year after more than three years during which it was unable to approve transactions greater than $10 million.

Exim first approved the loan for the Mozambique liquefied natural gas project when it was led by Anadarko Petroleum Corp. Though it was later sold on to French oil major Total SA, the project will still support U.S. companies that have been awarded contracts worth billions of dollars to help build the facility that by the bank’s count could back 16,700 American jobs.

Beating Chinese banks outright may not always be so clear cut. Exxon Mobil Corp. is planning to develop a facility next to Total’s, with China National Petroleum Corp. as one of its partners.

The participation of the state-owned Chinese company may not prohibit Exim from supporting the project, even though the goal is to “push back” against China, Renna said. Exxon did have an application with the bank before it was withdrawn when a final investment decision was delayed.

Exim has provided financing for a rural electrification project in Senegal. Solar and storage projects could also see funding, though Renna notes the bank is not the policy arm of the government and doesn’t choose the projects pro-actively.

In addition to power developments, there’s also a focus on telecommunications where concerns over new technology is increasing, according to Renna.

“A number of African governments have reached out and said: ‘We want to turn away from China, we’re concerned about the security of the information in our system,’” he said. “Alternatives have to bring financing and so that’s where we’re trying to step up and step in.”